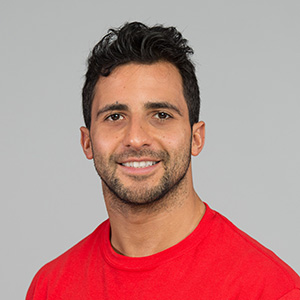 Hugh Smith is the veteran of the Canadian gymnastics team who won his first senior national all-around title in 2013 at the age of 29. He went on to make his FIG World Championship debut in 2014, after having been an alternate for the world team in 2010. Also in 2014, he won silver on vault and helped the team win bronze at the Pacific Rim Championships. Smith missed out on qualifying for Canada’s lone men’s artistic gymnastics berth at London 2012, after which he took a break from the sport before continuing on with the goal of making it to Rio 2016. Smith competed at both the 2007 and 2011 Pan Am games, winning bronze on vault in Guadalajara. His multi-sport competition experience also includes the 1999 Canada Winter Games. He won all-around bronze at the 2015 Canadian Championships.﻿

Getting into the Sport: Was enrolled in gymnastics because he would flip on his parents’ bed and jump off the fridge and do other crazy stuff around the house… Competed in his first gymnastics meet at age 8 and won 6 gold medals, inspiring him to make gymnastics a big part of his life…﻿

Favourite mottos: “Make it happen!” and “If you don’t know where you want to go, it doesn’t matter what road you take”…﻿