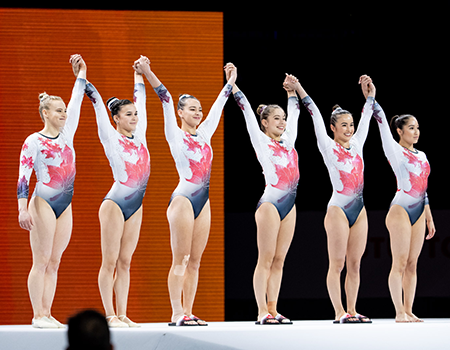 The team, composed of Ellie Black of Halifax, NS, Brooklyn Moors of Cambridge, ON, Shallon Olsen of Surrey, BC, Ana Padurariu of Whitby, ON, and Victoria Woo of Brossard, QC, ended the day with a total score of 160.563 – a few points shy of their qualifying score of 162.922 after two unfortunate falls on beam in the first rotation, and a fall on the uneven bars.

“I’m really proud of our team,” said Black who competed on all four apparatus today. “We started off with a little bit of a rough event on beam, but we were able to come back and have some strong performances after that, and we finished off on a high note on bars. It was great just to get out there and have another opportunity in a team final on this amazing arena floor.”

A lot of competitors seemed to have a tough time today with some uncharacteristic falls on several apparatus. China in particular had a tough time on uneven bars and dropped out of the medals for the first time since 2003, giving Italy the opening to move up and capture their first World team medal since 1950.

Black and Moors were the only athletes to compete on all four apparatus for Canada, Olsen competed on floor and vault, Padurariu competed on the beam, ﻿and Woo competed on bars which she admitted was a bit stressful: “I feel like it’s more stressful only doing one event in a team final because you really don’t want to mess up your one event!”

Coming up next for Canada at these World Championships will be the women’s all-around final featuring Black and Moors on Thursday. Saturday will see Olsen compete in the vault final where she’ll see if she can make a return trip to the podium. The competition will wrap-up on Sunday with Black and Padurariu competing the beam finals where Padurariu will be looking for a podium repeat.