Rene Cournoyer was just seven years old and hardly aware of the Olympics when Kyle Shewfelt won the gold medal for floor exercise at the 2004 Games in Athens. 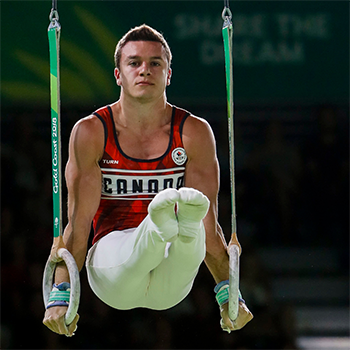 Rene Cournoyer was just seven years old and hardly aware of the Olympics when Kyle Shewfelt won the gold medal for floor exercise at the 2004 Games in Athens.

“I had no idea how cool it was,” said Cournoyer.

It was later, when Cournoyer began climbing the ranks and competing at national and international events that he began to realize the contribution Shewfelt made to Canadian gymnastics. The three-time Olympian would become a mentor for Cournoyer and the two speak regularly.

“I looked into the character of the guy,” said Cournoyer, who trains with Club Gymnika in Repentigny, QC, with coach Jean-Sebastien Tougas. “His resolve, his history, everything about it. I wanted to be that guy. I wanted to be the next Kyle Shewfelt.”

Cournoyer will get his chance to follow in Shewfelt’s footsteps when he competes at this summer’s Tokyo Olympics. The 24-year-old from Repentigny will be the lone male on the Canadian artistic gymnastics team and will compete on every apparatus with the goal of advancing to the all-around finals.

The artistic gymnastics competition will be held from July 24 to Aug. 3 at the Ariake Gymnastics Centre.

Cournoyer qualified for his first Olympics at the 2019 World Championships in Stuttgart, Germany, finishing 43rd in the all-around. Like many athletes, the one-year delay in hosting the Games due to COVID-19 presented both challenges and opportunities.

“There have been ups and down in motivation, mental preparation, and physical conditioning,” said Cournoyer. “The main takeaway is that I got an extra 12 months of preparation for these Olympics. I used that time to heal some injuries and get stronger.

“I’m glad that I can compete at these Olympics much more prepared than I would have done last year if it happened.”

Cournoyer said gymnastics has evolved since Shewfelt became the only Canadian to win an Olympic gymnastics medal. The performance he did in Athens might not even put him into the finals today.

What Cournoyer admires most is Shewfelt’s mental strength and ability to cope with adversity. He just missed capturing a bronze medal on vault in Athens when a Romanian edged him by 0.013 points despite falling in his second vault.

Shewfelt also broke his legs 11 months prior to the 2008 Beijing Olympics but recovered in time to compete.

The Tokyo Games are going to be very different with few fans in attendance and athletes confined to the village.

“It’s something you need to accept,” said Cournoyer. “It doesn’t change your performance that much. It’s going to be different but it’s not going to be my first competition with a quiet crowd.

“It’s something we expected and something I could prepare for.”

Cournoyer’s goal is to leave the Olympics satisfied with his performance.

“It may sound simple, but the only thing I really want is to do the best I can and to leave the competition venue with pride and the satisfaction of saying I did everything I could, I left everything out there,” he said.

“That will be the perfect Olympics for me, regardless of the results, just saying I did the best I could and that I did what I trained for.”