BURNABY, BC (February 15, 2020) – Katherine Uchida from Jusco RGC in Toronto, ON leads the senior field after the first two days of competition at the 2020 Elite Canada in Rhythmic Gymnastics competition at Fortius Sport & Health in Burnaby, BC, while her Jusco teammate Emily Huseynov leads the junior competition. 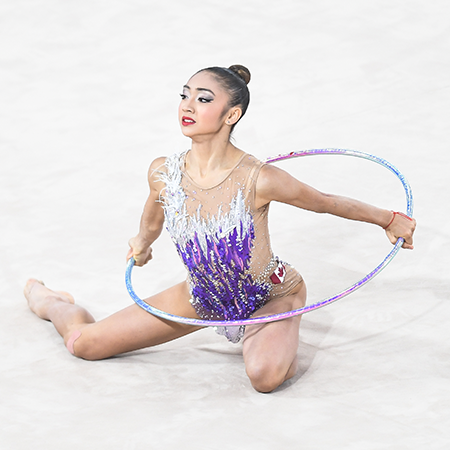 Uchida, who was the top overall performer for Canada at the 2019 World Championships last fall, had little mistakes in three of her routines which lowered her overall score, but then achieved her highest mark with her ribbon routine – ironically the routine that was her nemesis at the 2019 Pan American Games this past summer when a mistake with it cost her the podium in the all-around competition.

“I started the competition yesterday with a new hoop routine which I find it very difficult, and I still get quite nervous going into it, and it definitely showed as I had a pretty big mistake with it. Today I was feeling the pressure to not do any mistakes and that showed in my first routine of the day which was clubs. But then the routine that I dropped in Lima saved me here, so I’ve solved one problem, and now I have one more day to redeem myself,” said Uchida. “Tomorrow, I just want to enjoy myself more; to take the pressure off. I tend to do better when I’m performing, rather than competing.”

“Coming in I was just hoping to do good routines, and the first day was better than most competitions, as far as my ball routine – I’ve had a lot of downs leading in to this competition, so I was grateful to at least pull off a decent ball - not perfect though, so I know what to improve in the final,” said Garcia who captured a silver medal in clubs at the Pan Am Games last summer. “Today was really about climbing back up, so I was focusing on being in the moment and fighting for every 10th.”

Huseynov moves into the junior finals having scored top marks with her clubs and ribbon routines on day two, and a second-place score in rope which gave her a two-day total of 59.300. Christina Savchenko, also from Jusco RGC, finished second with a total score of 57.350, including a top score with her ball routine, despite receiving a 0.5 deduction.

The top-15 athletes in the senior and junior categories in competition ‘A’ move on to the finals or Competition ‘B’ on Sunday.

Sunday kicks off with the first performance by the junior and senior groups at 9am PT, followed by the junior finals at 9:40am PT. The second performance by the groups takes place at 1pm PT followed by the senior finals at 1:40pm PT. Tickets are available at the door, and the event is being live-streamed by FloGymnastics here: http://bit.ly/36ZNlFd

First established in 1969, Gymnastics Canada has been supporting the mastery of movement in Canada for five decades as the national governing body for the sport of gymnastics in Canada. We work closely with the twelve provincial federations and 700 local clubs to provide a broad range of programs and services to meet the needs of all participants. From athlete development, to coach and judge education, Gymnastics Canada sets the operating standards and practices for the sport in Canada. Our mandate is to promote and provide positive and diverse gymnastics experiences through the delivery of quality and safe gymnastics programming. Visit www.gymcan.org for more information, or follow us @gymcan1. From here, we soar.