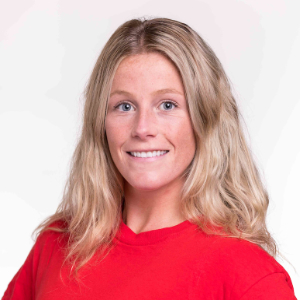 2018 Commonwealth Games Team Gold and Bars Silver Medalist...2017 FISU Games Champion on Vault…Two-time Olympic Games team member (2012, 2016)… Helped Canada reach the team final for the first time, matching its best ever result with a fifth place finish at the 2012 Olympics… Competed for the University of Georgia from 2012 to 2016. Earned Georgia’s first perfect 10 since 2010 (on Vault), and became the NCAA champion on Bars in 2016. Two-time World Championships team member (2009, 2015)… 7th on Vault and 19th A-Around at the 2009 World Championships…﻿

Getting into the Sport: Started gymnastics at age 6 in an attempt to channel her excess energy… By age 3 had been capable of swinging from ring to ring on the playground… At age 12 qualified for the Junior Pan Am Championships…

Outside Interests: Enjoys water sports, going to the beach or lake, and traveling… Fourth year Consumer Journalism Major at the University of Georgia…

Odds and Ends: Nickname Brit… Inspired by Canadian Olympic gymnast Kate Richardson for her humility and the similarities in their athletic abilities…

Favourite motto: Everything happens for a reason… Has Olympic rings tattoo on her right ankle over the scar from her surgery…﻿
﻿