MONTREAL, QC (March 8, 2020) – Canadian senior and junior national team gymnasts captured eight medals over the course of the weekend at the 2020 International Gymnix competition in Montreal, QC including team bronze medals in both the Senior and Junior Cups, and a bronze for Audrey Rousseau of La Prairie, QC in the senior all-around competition on Friday night. 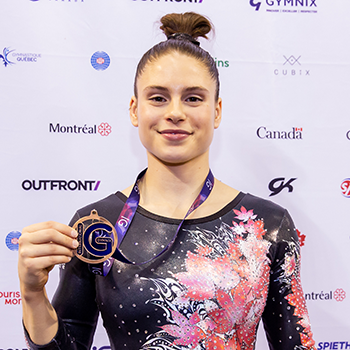 The Canada 1 team featuring Rousseau, Isabela Onyshko of Vancouver, BC and Victoria Woo of Brossard, QC competed with only three athletes compared to the other teams all having four, after Ana Padurariu of Whitby, ON pulled out of the competition last Monday to save her energy for some upcoming World Cup competitions this spring.

With all of their scores counting towards the overall total, the team laid down strong performances to finish with a meet total score of 150.429 to take the bronze medal. The Canada 2 team of Laurie Dénommée of Laval, QC, Quinn Skrupa of Brandon, MB, Rose Woo of Brossard, QC, and Sophie Marois of Île Bizard, QC finished just behind in fourth with a total score of 150.330. The American team won gold with a score of 160.628, while Belgium took the silver with a total score of 153.330.

For Rousseau, capturing the bronze medal in the all-around competition showed she has quickly returned to form after retiring from the sport for a year: “The competition went really well for me. I am really happy and proud overall of my performance but I am particularly proud of my floor and my beam routines. I really had fun competing with my teammates and I am glad that I had the chance to represent my country at home in front of my family and friends. It was a great experience and I really enjoyed it.”

Emily Lee of the USA won the gold medal, while her teammate MyKayla Skinner captured silver.

“The teams really pulled together and everyone did their job tonight,” said Lorie Henderson, National Team advisor for the junior and youth national teams at Gymnastics Canada. “If they had something good, it was great, and if they didn’t have something good they picked themselves up, and they went on to do better on the next event – I’m super pleased with all of the performances.”

In the senior apparatus finals on Sunday, Marois and St. Pierre finished 2nd and 3rd respectively in the vault final to come home with two more medals for Canada. Rousseau had qualified for three finals as well but had to leave early Sunday morning to travel to a World Cup event taking place in Baku, AZE next weekend and so did not compete.

Canadian athletes also had strong results in the Challenge Cup. Visit the link below for complete competition results.