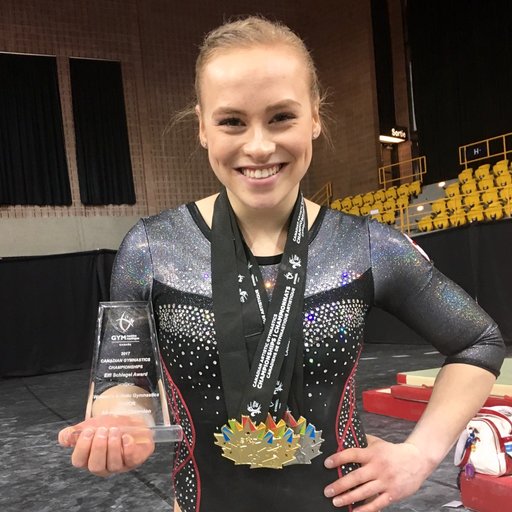 “My goal today was just to compete, stay healthy and have some fun out there,” said Black following the award ceremony. “It’s nice to be back with the girls again and to build some excitement in the building. I’ve enjoyed the whole experience and I’m so happy to be healthy and back competing.”

Black also added a gold medal on floor scoring 13.350. Her Rio Olympic teammates took gold on the other apparatus with Shallon Olsen of Surrey, BC winning gold on vault with a score of 14.380, Isabela Onyshko of Brandon, MB scoring 14.034 on beam to win that gold, and Brittany Rogers of Calgary, AB taking gold on the uneven bars with a score of 13.634 points.

In junior action, Ana Padurariu of Whitby, ON was unstoppable, taking the gold medal in all four apparatus finals as well as taking home the all-around Canadian Championship title. Padurariu’s overall score of 55.267 was more than four points ahead of Emma Spence of Cambridge, ON who took home the silver medal while Quinn Skrupa of Brandon, MB won bronze.

“I’m pretty proud of my overall performance,” said Padurariu. “I did a new combination on bars which I was really proud of and hopefully I can improve that for next year. I’m going to go home and work on routines for next year since I’ll be a senior, so it will be a lot of hard work to get to that point but I’m excited and looking forward to it. The plan is to always add difficulty to get to the top at the world level.” When asked why she competes and what being the Canadian Champion means to her, Padurariu beamed: “I love gymnastics because it is so challenging; it’s an immediate reward and there is always something new to learn and you never get bored, ever.”

The senior men’s competition saw a new champion crowned as Zachary Clay from Chilliwack, BC won his first ever senior Canadian title. Clay, who has been a senior for over five years, has never competed at a Canadian Championship due to injury but certainly proved he was a champion tonight.

Clay finished with 81.750 points to win the gold medal with defending Canadian Champion Jackson Payne of Edmonton, AB scoring 79.400 to win silver, and Sam Zakutney of Ottawa, ON winning the bronze with 78.900 points.

“This is the best feeling ever, no words can describe how I feel right now,” said Clay following his win. “I wasn’t expecting to come first, I was just aiming for the podium but everything just came together today. I was in the zone and focused on what I had to do to win and am happy with the results. Tomorrow I am hoping apparatus finals go well and I’m looking forward to the pommel horse, which is my strongest event.”

The junior men’s 14-15 competition had Evgeny Siminiuc of Ontario win the all-around title with a score of 99.000 points while Dorian Doan, also from Ontario won silver, and Drew Kanigan from BC took the bronze. William Émard from Quebec won the junior men’s 15-16 all-around championship scoring 105.800 points with Darren Wong of BC taking home the silver, and Alex Watters from Nova Scotia winning the bronze.

“I’m really happy, it’s been a long week,” said Émard. “It’s my first competition since November 2016 due to injury, so I have worked hard over the last couple of months to get to this point so I’m proud of what I accomplished.”

First established in 1969, Gymnastics Canada is the national governing body for the sport of gymnastics in Canada. Gymnastics Canada works closely with the twelve Provincial Federations and the 700 local clubs to provide a broad range of programs and services to meet the needs of all participants. From athlete development, to coaching and judging education, Gymnastics Canada sets the operating standards and practices for the sport in Canada. Our mandate is to promote and provide positive and diverse gymnastics experience through the delivery of quality and safe gymnastics programming. Visit www.gymcan.org for more information, or follow us @CDNgymnastics.