ST. PETERSBURG, RUS (November 10, 2018) – Two-time Olympic gold medallist Rosie MacLennan of King City, ON stood on top of the podium on Saturday afternoon in St. Petersburg, Russia after claiming gold in women’s individual trampoline at the 2018 FIG Trampoline Gymnastics World Championships for the second time in her career. 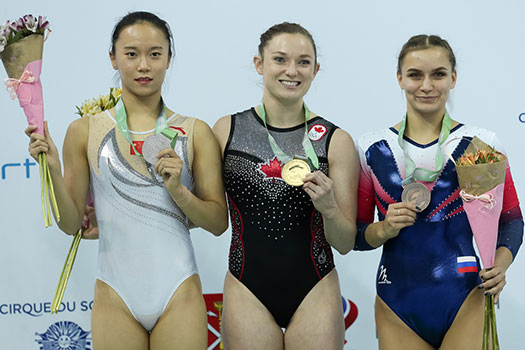 The battle for gold was clearly between Xueying Zhu of China and MacLennan who entered the final ranked one and two respectively. Zhu actually outscored MacLennan in the final, but was given a 0.2 penalty for taking too long to begin her routine leaving MacLennan with the higher score overall. Zhu ended up with the silver medal while Yana Pavlova of Russia captured the bronze medal.

“I’m really excited, I’m really proud of the routines I put out today and I can’t believe it yet,” said MacLennan who last won gold in individual trampoline at the 2013 World Championships. “Coming into this competition, I was really just trying to focus on my routines and getting them as clean, as high, and as in the middle as possible. I had no idea where that would land me. The field is really strong – all of the girls did an amazing job and I’m super proud of them and it’s really motivating to watch them.”

Samantha Smith of Toronto, ON had a strong performance in the semi-finals to finish the competition ranked 11th overall.

In other finals action, Kalena Soehn of Red Deer, AB just missed the podium in the women’s double mini-trampoline finals, finishing in fourth with 67.200 points. Lina Sjoeberg of Sweden took the gold, Melania Rodriguez of Spain the silver, and Kristle Lowell of the USA the bronze.

“The competition went really well. It could have gone better – I finished fourth, so I wish I had done just a little bit better, but this is nothing to sneeze at. I was really hoping I could perform my routines as well as I did in prelims and I did so I’m really happy,” said Soehn who will also be competing in the World Age Group Competitions next week – but in trampoline and synchro trampoline.

Laurence Roux of Blainville, QC, who is competing in her first senior World Championships, finished the day in sixth position in the DMT finals, despite having entered the finals in second place but learned some valuable lessons for the future:  “My game plan was to not think about others, but about my own performance, but when I was on the spot I could hear everyone cheering, and I so I didn’t really follow my plan and let my head go somewhere else. I think that’s kind of why I didn’t do as well as I wanted to. I did my best two passes in the prelims to have a chance to do finals. So in finals, it was my two weakest passes which I hadn’t trained as much so I wasn’t as confident with them.”

Canada finishes these World Championships with three medals total with MacLennan having been a factor in all of them giving her a medal in each colour – bronze in the all-around team competition on Thursday, silver in women’s synchronized trampoline with Sarah Milette yesterday, and gold today.

The St. Petersburg Sports and Concert Complex will now welcome the youth of the trampoline world as the 2018 World Age Group Competitions kick off on Thursday.

For all of the competition results visit: https://live.gymnastics.sport/schedule.php?idevent=15408

First established in 1969, Gymnastics Canada is the national governing body for the sport of gymnastics in Canada. Gymnastics Canada works closely with the twelve provincial and territorial federations and 700 local clubs to provide a broad range of programs and services to meet the needs of our over 325,000 participants. From athlete development, to coach and judge education, Gymnastics Canada sets the operating standards and practices for the sport in Canada. Our mandate is to promote and provide 6positive and diverse gymnastics experience through the delivery of quality and safe gymnastics programming. Visit www.gymcan.org for more information, or follow us @CDNgymnastics.