Ottawa, ON (October 18, 2019) – The gymnastics community is mourning the loss of one of our own. Tamara O’Brien (22), a silver-medallist at the 2017 World Games in double mini-trampoline, and a member of our national team for over 10 years, passed away on Tuesday, October 15th in Vancouver, BC after a two-year battle with cancer. 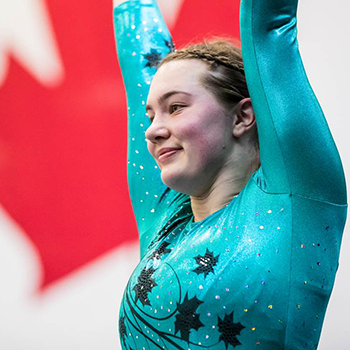 “Tamara was such a bright light in our community and she will be sorely missed,” said Ian Moss, CEO of Gymnastics Canada. “We extend our sincerest condolences to her family and friends, her coach Curt de Wolff, and her club – Shasta Trampoline, and everyone that she touched during her life. She was an exceptional athlete, and an exceptional person, and was taken from us far too soon.”

O’Brien started in artistic gymnastics at the age of 2, and moved over to trampoline at 9, making the national team at the age of 11. Like many trampoline athletes, O’Brien competed in trampoline, double mini-trampoline, and tumbling for many years, capturing medals in all, before deciding to really specialize in double mini, or DMT, in 2014. She became a World Team DMT Champion in 2015, and in 2017, capped off an incredible year by winning a silver medal at the World Games. She was diagnosed with Stage 3 Melanoma shortly afterwards, forcing her to retire from competitive gymnastics.

In November 2018, thanks to the Forward Foundation, a charitable organization whose mission is to: “provide young adults who are terminally ill with meaningful end-of-life experiences,” Tamara was able to travel to the Trampoline Gymnastics World Championships in St. Petersburg, RUS to cheer on her teammates. The team welcomed her by wearing “We Jump for Tamara” t-shirts, and also elected her as the team’s Opening Ceremonies flag bearer. Rosie MacLennan would also award her with one of the bronze medals that the team won in competition.

In June 2019, Tamara learnt that the cancer had spread to her brain, and throughout her body, and in September learnt that the disease had progressed significantly. She passed away peacefully this past Tuesday.

Just days before she passed, CBC Docs released this video featuring Tamara – it tells her story beautifully and is a true testament to her strength and what made her so unforgettable.

Rest in Peace Tamara, we’ll miss you, but we will never, ever forget you. You truly did live each day with meaning and we will all work to do the same in your honour.