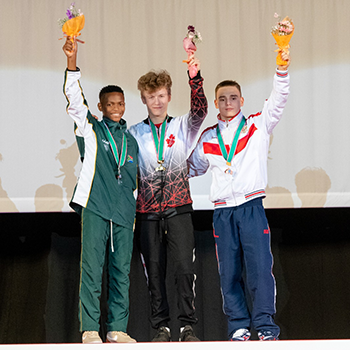 Lupish, who trains out of the Burlington Trampoline & Tumbling Club, qualified for the finals in fourth position with a score of 70.900 and was able to improve on that score in the final, laying down two great passes to score 72.100 to win the gold medal. Tshepang Mamabolo of South Africa took silver with a score of 71.600 while Timofei Lazutin of Russia captured bronze with a score of 71.000.

“I did most of my planned passes so the competition went pretty well for me. For my next event I want to up by DD (degree of difficulty) and be more consistent with my passes. I messed up one here, so I just want to be able do all four passes consistently,” said Lupish who also competed in trampoline and synchronized trampoline at this competition. “I felt really proud to be part of a team that is so supportive, and it felt really good to hear everyone cheering for me when I showed up as first on the score board.”

Other competitors in this event included Gavin Dodd of Kamloops, BC who finished 13th, and Nolan Zurek of Edmonton, AB who finished 16th.

All of Canada’s 15-16 girls DMT competitors qualified for the finals but finished off the podium. Abby Thompson of Calgary, AB was the top finisher in fourth while Zoe Phaneuf of Cochrane, AB finished sixth, and Jasmine Parhar of Port Moody, BC finished eighth.

“With this being my first international competition, I was really happy with how I performed. For my next event, I’m going to work towards having more consistent routines, and more consistent landings, because every routine I completed this weekend didn’t finish in the box,” said Thompson who trains out of the Calgary Gymnastics Centre. “Making finals was really memorable, and it was great to see all of the amazing athletes from around the world at this competition.”

Also making finals on the last day of competition were Mariko Nagano and Lianna Pinnock, both of Toronto, ON who finished the girls 17-21 synchronized trampoline competition in eighth position – unfortunately not completing their routine in the final. Maja Bonham of Vancouver, BC and Gabrielle Flynn of Burnaby, BC finished in 13th.

Rachel Tam of Toronto, ON, who captured a bronze medal in synchronized trampoline with Samantha Smith of Vancouver, BC last weekend at the World Championships, was the only athlete to qualify for finals between the first and last days of competition, and unfortunately wasn’t able to match her bronze medal winning performance from the 2018 World Age Groups in individual trampoline, bouncing out of her routine to finish eighth in the girls 17-21 category.

"We had many great performances this week and it will be exciting to get to watch these young athletes grow, as they are the future of our sport,” said Niki Lavoie, Program Manager for Trampoline Gymnastics at Gymnastics Canada. “It was exciting for them to have the opportunity to compete in the Olympic venue, and it was a great way to end the competition by singing our national anthem.”

First established in 1969, Gymnastics Canada has been supporting the mastery of movement in Canada for five decades as the national governing body for the sport of gymnastics in Canada. We work closely with the twelve provincial federations and 700 local clubs to provide a broad range of programs and services to meet the needs of all participants. From athlete development, to coach and judge education, Gymnastics Canada sets the operating standards and practices for the sport in Canada. Our mandate is to promote and provide positive and diverse gymnastics experiences through the delivery of quality and safe gymnastics programming. Visit www.gymcan.org for more information, or follow us @gymcan1. From here, we soar.