VALLODOLID, ESP (October 6, 2019) – Jason Burnett of Toronto, ON and Jérémy Chartier of Montreal, QC combined forces to capture a silver medal in men’s synchronized trampoline at a World Cup competition in Vallodolid, ESP this weekend, while Samantha Smith of Vancouver, BC and Rachel Tam of Toronto captured bronze in women’s synchronized trampoline. 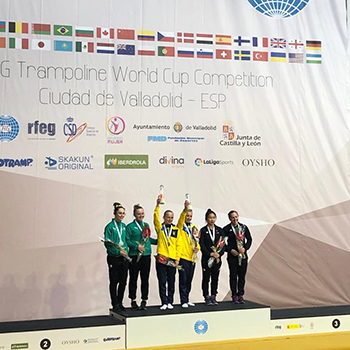 Burnett and Chartier came into the finals ranked 7th and scored a 51.020 to improve their ranking to second overall. Daiki Kishi and Ryosuke Sakai of Japan took the gold with a score of 52.380, while Mikita Fomchanka and Ivan Litvinovich of Belarus took bronze with a score of 50.390.

Smith and Tam had also placed 7th in the qualifiers and scored a 46.360 to take bronze behind Maryna Kyiko and Svitlana Malkova of Ukraine who scored 49.270 to win gold, and Lauren Sampson and Jessica Pickering of Australia who scored 46.360 to take silver.

"We were really excited to get to compete in finals together again, and this time take home a medal,” said Smith who captured gold in individual trampoline at the recent 2018 Pan American Games. “We're both looking forward to competing at the World Championships in Tokyo, and hopefully doing just as well there."

Sarah Milette of Longueuil, QC was the lone Canadian to qualify for the trampoline finals, and finished sixth overall, gathering some valuable points towards Olympic qualification.