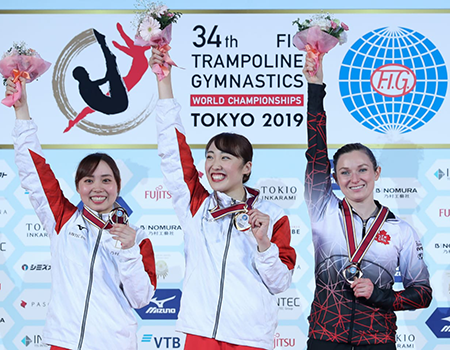 MacLennan entered the individual trampoline competition as the defending World Champion and was able to put down a solid routine to score 54.820 to take the bronze. Mori Hikaru and Chisato Doihata of Japan thrilled the Japanese crowd, taking gold with a score of 55.860, and silver with a score of 55.225 respectively. Samantha Smith of Vancouver, BC finished the day ranked seventh with a score of 53.450.

“I decided to go with a slightly easier routine today, and to just keep it high and clean, and I think it paid off, I was able to feel a little more stable on the trampoline and I was really happy with it,” said MacLennan. “I came into this competition trying to focus on one day at a time, and to put out the best routines I could, and I was able to do that, and to be able to come out with a medal is really unbelievable. I’m really excited to get back home and get back training and keep pushing for the World Cups next year.”

“Today was not exactly what I wanted, but I’m still really proud of myself and how the whole competition went,” said Miller-Burko who was competing in her first-ever World Championships final. “My main take away from this is to not let the nerves take-over!”

Canada rounded out the competition by finishing fourth in the team all-around competition. This is only the second time this competition has been held, so the format is still quite new for the athletes and coaches. Canada came away with the bronze last year, but this year wasn’t able to stop the teams from Russia, the United States, and China who took gold, silver, and bronze respectively.

“Today’s competition went pretty well. When you’re in the later groups, you don’t really get to see how your team is doing until the replays, so it keeps you in suspense,” said Schwaiger who represented the team in men’s tumbling. “Everybody came off smiling in the back which is always good. It’s a little bit more of a hectic competition, but it’s a fun way to wrap-up things up.”

Mario Bruno, who finished fourth on Saturday in the men’s DMT finals, added: “I’ve kind of had the meet of my life. Usually I get really nervous, but I just managed to get myself in the zone, so I’m really happy with performance overall. There’s room for improvement, but overall I’m just really happy.”

Karen Cockburn, National Team Director for Trampoline Gymnastics at Gymnastics Canada was very pleased with the team’s performance overall: “The women’s trampoline team really shone at these world championships. A bronze medal in women’s individual, women’s synchro, and the team event shows the talent and depth we have in Canada. These podium performances and earning the Olympic quota for Tokyo 2020 sets the tone as we lead into an Olympic year. In the tumbling and double mini disciplines, the athletes earned full quota places for the 2021 World Games, and finishing just off the podium in the DMT event shows we have real medal potential for those Games in 2021.

As the senior athletes head back to Canada, the age group athletes take the stage with the 2019 World Age Group Competitions starting on Thursday. Canada will field a team of 33 athletes competing in all four disciplines in four different age categories. Rachel Tam of Toronto, ON who leaves this competition with a bronze medal in synchronized trampoline, will be looking to see if she can climb the podium again, but this time in individual trampoline. She captured a bronze medal in that event at the 2018 World Championships. Antonio Fernandes of Calgary, AB will also be staying in Tokyo to compete in this competition but this time swapping tumbling for DMT.