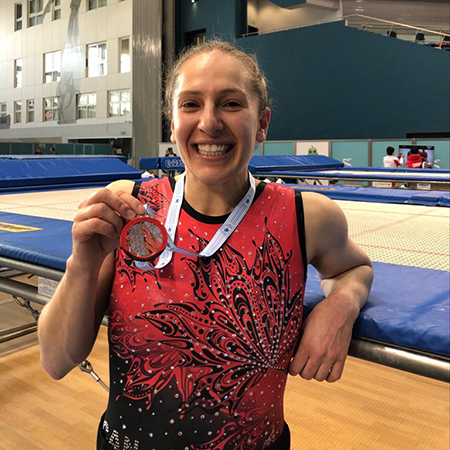 Smith qualified for the finals in 9th position and laid down a fantastic routine in the finals to climb onto the podium with a total score of 54.585. Zhu scored a 55.810 while Liu scored 54.945.

“The competition went really well this weekend,” said Smith. “This is my first World Cup medal ever, and I am so glad to have earned it in an Olympic trial. I increased the difficulty of my optional routine after World Championships, and I am thrilled with how it worked. It was a really great final to be a part of, with all the girls showing really solid routines.”

In the men’s synchronized trampoline final, Chartier and Soehn qualified for the final in seventh position and were having a great routine until their eighth skill where Chartier unfortunately bounced out of bounds, ending their routine. They ended the day with a total score of 36.110. Belarus took gold with a score of 52.720, while France took silver with a score of 51.310, and Kazakhstan took bronze with a score of 50.780.

“The competition didn’t go as well as planned but considering that I’ve been battling a shoulder injury for the past few weeks, the routines went ok,” said Soehn who was Canada’s top finisher in men’s trampoline, finishing 35th. “My goals coming into this weekend were to get into the top-15 and hopefully final - those goals were not accomplished but in a way I am partly satisfied with how the routines are becoming easier. The highlight of the competition was definitely getting to compete in the synchronized finals.”

Next up for these athletes will be Trampoline Elite Canada being held in Longueuil, QC in March, followed by the last World Cup of the Olympic qualifying series in Brescia, ITA at the end of April.