OTTAWA, ON (May 6, 2021) – The 2021 Elite Canada Virtual Competition Series in Women’s Artistic Gymnastics wrapped up this past weekend with Ellie Black from Halifax, NS taking the senior all-around title following the three rounds of virtual competitions. Aurélie Tran from Repentigny, QC captured the junior all-around title. 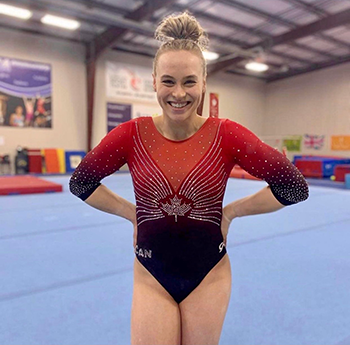 Held virtually, athletes and coaches submitted videos of their routines taken at their home gyms over the course of three competitions starting back in February and wrapping up this past weekend. With many provinces under varying shutdown orders due to the COVID-19 pandemic during this time, not all eligible athletes competed in every competition, so awards were handed out for the overall top scores attained from routines submitted for any of the competitions.

Black, Canada’s most decorated women’s artistic gymnast who is looking to qualify for her third Olympic Games in Tokyo this summer, dominated all rounds of the senior competition, placing first in the all-around in each round, and winning the overall all-around title with her score of 55.450.

“My major goal (for these competitions) was just to get back into competing again, or some sense of competition,” said Black who had just made her return to competition at the American Cup in early 2020 after injuring her ankle at the 2019 World Championships. “For us, we hadn’t competed before these virtual competitions for about a year, so it was more about just having some competitions, and getting back into that mindset, that atmosphere, and building our skills and routines back to where we want them to be heading into the summer.”

Black also captured gold on beam with her high score of 14.400 attained at the first virtual competition back in February: “I put a few things back into my beam routine – some of the harder skills that I haven’t competed in many years and then a couple of new combinations so I was really proud of myself to just be able to put my hard dismount back in, and all those hard skills and combinations.”

Black also captured silver on bars with a score of 14.400, and on floor, where she tied with Cassie Lee of Toronto, ON and Brooklyn Moors of Cambridge, ON with a score of 13.100. Her vault score of 14.450 was also the second highest of the competition, but she only competed one vault in each round so wasn’t eligible for a vault medal.

Making a real splash in her senior debut was 15-year-old Ava Stewart from Bowmanville, ON who captured the silver medal in the all-around with a high score of 55.000 over the three competitions. She had also finished second in each round, steadily improving each time to record her silver-medal winning score at the last trial this past weekend.

“My goal in the first place was to make as many teams as I could without overwhelming myself too much, but with each competition, I was just getting more and more of a possibility to make more teams. My last competition was one of my best bar routines that I’ve competed so far so that was nice. I stuck the whole thing, and I put in a new connection that I hadn’t done yet,” said Stewart, who won gold with that bars routine with a score of 14.650, and who is age-eligible for the Tokyo Olympic Games due to the delay of the Games and the International Gymnastics Federation allowing new 2021 seniors to be allowed to qualify for the Games. Stewart also captured silver on beam with her score of 14.000.

Rounding out the senior all-around podium was 2016 Rio Olympian Rose Woo from Montreal, QC who also consistently finished third across all competitions, laying down her high score of 53.400 this past weekend. She also had the top score on floor to take gold on that apparatus with a score of 13.200, and captured bronze on bars with a score of 13.700.

Taking gold on vault was Shallon Olsen of Surrey, BC – the World silver medallist on that event in 2018, with scores of 14.300 and 14.750. Sophie Marois of Montreal took silver on vault, while Laurie Denommée of Saint-Eustache, QC took bronze.

Clara Raposo of Toronto, ON who is also making her senior debut this year after a stand-out junior career, took bronze on beam with a score of 13.250.

In the junior competition, Tran dominated the competition, winning the all-around competition with a high score of 51.250, as well as gold on every apparatus. Victoriane Charon of St-Hilaire, QC captured the silver all-around medal with a score of 50.500, as well as silver on bars and floor. Amy Jorgensen of Saskatoon, SK rounded out the junior all-around podium, capturing bronze with a score of 50.250. She also took silver on beam, and bronze on floor. Other medal winners were Tegan Shaver of Gatineau, QC taking silver on vault, and Virginie Therrien of Montreal, QC capturing bronze on vault and beam.

David Kikuchi, Ellie’s personal coach, and one of the lead coaches for the Tokyo Games along with Lorie Henderson, was pleased with the routines submitted, despite the tough year it’s been for everyone: “I’m happy with the performances – some people were ready right away, and some just came in for the first time last week, but the level has been consistently improving for everybody which has been good to see. It is still a really tough time, and it’s been a tough year and a bit for everyone, but it’s encouraging to see everyone get back to competition and improving.

“I’m also super glad that this all worked out doing these competitions virtually because we’ve never done anything like this before. It was a lot of work to set it up and to create the rules around it and how the judging was going to work, but it’s all worked really well, and so I’m really proud of that and that our team was able to figure that out, and everyone bought in and it worked really well.”

The athletes in all gymnastics disciplines who will be nominated to the Canadian Olympic team for Tokyo 2020 will be announced on June 17th.

Due to technical difficulties, the submitted videos for the last technical trial are not available for viewing yet. We will post them to our website at the results link below as soon as possible.