OTTAWA, ON (August 9, 2022) – The 2022 Commonwealth Games kicked off with Artistic Gymnastics from July 28 to August 2 at the Arena Birmingham, in England. Among the top performances was Emma Spence, who captured three bronze medals and quickly became a fan favourite for her fun-loving attitude on the field of play. 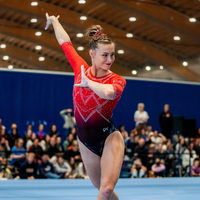 Team Canada finished strong during the Artistic Gymnastics competition at the 2022 Commonwealth Games in Birmingham, UK from July 28 to August 2. The competition began with both the Men’s and Women’s Artistic Gymnastics teams finishing on the podium during the team event. The MAG team captured the silver medal while the WAG team captured the bronze medal.

“I was so proud of how my competition went. Being my first international competition since the pandemic, my goal was to go out there, try my best and take it one skill at a time,” shared Spence following the Games. “By having fun and being myself out there I was able to perform well and enjoy the experience so much more. The big crowd in Birmingham was incredible and I am so thankful for all of the support I've received from everyone back in Canada!”

During the apparatus finals, the women’s team saw gymnasts qualify for seven of the possible eight spots. Emma Spence (Burlington Gymnastics Club, ON) qualified for each of the four apparatus finals and captured the bronze medal during the Balance Beam final on the last day of the Artistic Gymnastics competition. During the women’s Vault finals, Laurie Denommée (Méga-Gym, QC) finished in second place and the silver medal behind Australia’s Georgia Godwin.

In the men’s apparatus finals, Team Canada also saw gymnasts qualify for seven of the possible eight spots. Felix Dolci (Laval Excellence, QC) was the first of the team to finish on the podium, with a silver medal during the Floor Exercise competition. Quickly following Dolci, was Jayson Rampersad (Gymnastics Mississauga, ON) who captured the bronze medal on the Pommel Horse. Finally, Chris Kaji (Gymnastics Mississauga, ON) joined England’s Courtney Tulloch and Cyprus’ Sokratis Pilakouris on the podium as he finished with the bronze medal in the Rings final.

“Competing in such environment was absolutely awesome. Having this type of crowd cheering for you during your performance is so motivating and inspiring,” shared Dolci as he returned home from Birmingham. “Feeling extremely thankful to have the chance to take part into this type of event!”

ABOUT GYMNASTICS CANADA
First established in 1969, Gymnastics Canada has been supporting the mastery of movement in Canada for five decades as the national governing body for the sport of gymnastics in Canada. We work closely with the twelve provincial federations and 700 local clubs to provide a broad range of programs and services to meet the needs of all participants. From athlete development to coach and judge education, Gymnastics Canada sets the operating standards and practices for the sport in Canada. Our mandate is to promote and provide positive and diverse gymnastics experiences through the delivery of quality and safe gymnastics programming. Visit www.gymcan.org for more information or follow us @gymcan1. From here, we soar.