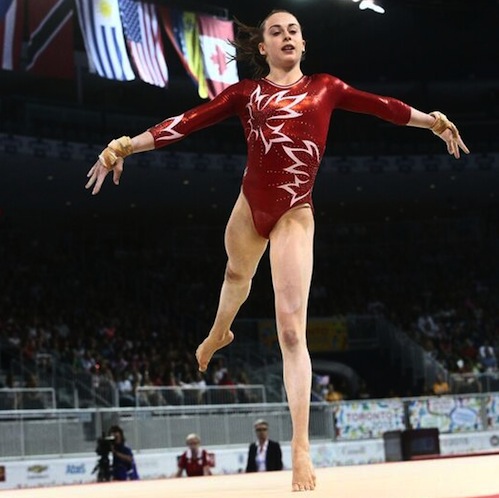 Onyshko, a member of Canada’s 2015 world championship and Pan Am Games teams, topped a field of 26 competitors in the all-around with a score of 57.550 points.

Axelle Klinckaert of Belgium placed second with 56.125 points and Rose-Kaying Woo of La Prairie, Que., was third at 55.225.

In the team competition, the Canada Power squad, one of three Canadian entries in the Senior Cup, earned its silver medal with a score of 166.300 points.

Belgium 1 finished a fraction of a point ahead to claim team gold with 166.450 points and a second Canadian team, the Rams, took the bronze with a score of 162.500 points.

Other members of the silver-medal winning Canadian team were Kirsten Peterman of Cambridge, Ont., Victoria-Kayen Woo of La Prairie, Que., and Laurie-Lou Vezina of Montreal.

“I tried not to think about the outcome and just tried to improve my routines,” said Onyshko, one of the leading contenders to win a spot on Canada’s team for the 2016 Rio Olympic Games.

“The biggest improvement for me over the last year is my double Yurchenko vault. It didn’t go as well as I hoped here but it went well in training and now I’ll go back home and work to make it better under pressure situations.”

Other Canadians who placed in the top-10 individual all around were Meixi Semple of Whitby, Ont.,(4th), Victoria-Kayen Woo, (5th), Madison Copiak of Calgary, (8th) and Kirsten Peterman, (10th).

“I moved up to senior this year, and this is my best result so far,” said Semple, who competed on Canada’s third team in Senior Cup which placed fourth.

“I competed as a senior at meets in Oklahoma and California and I did well but this was way more exciting,” said Semple. “It was a lot of fun to have so many other girls to push us and cheer us on.”

Competition continues with the Junior International Cup on Saturday and apparatus finals for both juniors and seniors on Sunday.