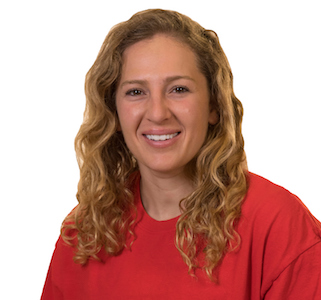 Samantha is one of three trampoline athletes Canada brought to the London Olympic Games in 2012 where she served as the team’s alternate. Since then, her goal has been to get back to the Games. Her recent finishes include 1st at the Pan American games, 7th at the 2019 World Championships in Tokyo, and 3rd at the most recent Olympic Qualification World Cup in Azerbaijan. ﻿

Beginnings: Started gymnastics at the age of 2 as an outlet for her overabundance of energy. What she loves about gymnastics: the creativity, and the opportunity to keep learning new skills. ﻿

Most memorable moment: Setting the female world difficulty record at the World Cup in Portugal in 2016.

Odds and ends: Admires her teammate Rosie MacLennan for being an amazing athlete and mentor. Samantha loves sports and the outdoors. She spends her spare time mountain biking and skiing. When she is not outside, she works as a physiotherapist in Vancouver. ﻿

Favourite quote: “Do you know what my favorite part of the game is? The opportunity to play.” - Mike Singletary﻿