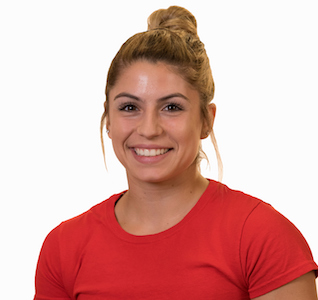 Sophiane Méthot won a surprise bronze medal at the 2017 Trampoline Gymnastics World Championships when she jumped from 14th in the qualifying rounds to finish on the podium. At 19-years-old, she has proven that she’s a serious candidate to represent Canada at the 2020 Olympic Games in Tokyo after becoming the Canadian senior champion in 2018. Previously, Sophiane won gold at the 2018 Senior Pan American Championships, the 2015 World Age Group Competition in the 17-18 age group, and at the 2015 Canada Winter Games.

Nickname: Soph
Getting into the Sport: Began at age 8 after she saw the movie 'Stick It' at the theatre.﻿
Most Memorable Moment: Winning the Gold medal at the 2015 World Age Group Competition in Odense, DEN.﻿
Odds and Ends: Dreams of travelling the world… Is afraid of dogs.﻿
Favourite Quote: "Pain is temporary but victory lasts forever."﻿