OTTAWA, ON (September 25, 2015) – Gymnastics Canada is pleased to announce the names of the athletes, coaches, and judges nominated to compete at the 2015 World Artistic Gymnastics Championships in Glasgow, Scotland from October 23rd to November 1st. This is the first of two qualifying opportunities for the 2016 Olympic Games in Rio de Janeiro.﻿ 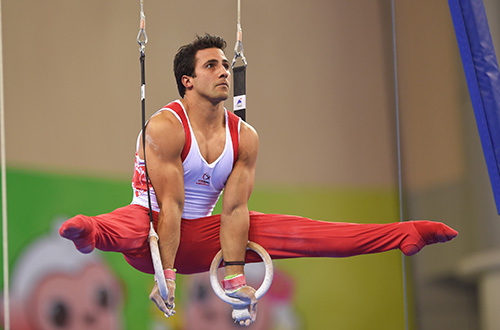 For both the Men’s and women’s teams, two additional reserves have been identified who will remain in Canada, but who could be called upon to compete or be a reserve on-site in Glasgow.

“The athletes in our World Championships pool have been following an intense plan for the past 11 months, and it was because of their hard work and team mentality that we were able to select the team that will take us to the next round of Olympic qualification,” said Tony Smith, National Team Director for men’s artistic gymnastics. “Our team is stronger and better prepared than we were at the Pan Am Games, so I have every reason to believe that this will be a rewarding World Championships for Canada.”

“To have our best outcome at the worlds, our team just has to focus on the process,” said National Team Director for women’s artistic gymnastics, Dave Brubaker. “We’re strengthening the whole team as we head into Rio. We have great leadership from Ellie (Black), Brittany (Rogers), and Isabela (Onyshko) and it’s really nice to be able to select from a larger pool of athletes. We seem to have more depth built into the program which is great for the future of gymnastics in Canada.”

INDIVIDUAL: The individual apparatus medal winners at the World Championships, who are NOT already part of a qualified team for the Olympics, will directly qualify for Rio. Those gymnasts on teams that advance to the test event will also contend for individual spots at that event with a maximum of two male gymnasts, and two female gymnasts per country qualifying.

For more details on the qualification process, please click here.

First established in 1969, Gymnastics Canada is the national governing body for the sport of gymnastics in Canada. Gymnastics Canada works closely with the twelve Provincial Federations and the 700 local clubs to provide a broad range of programs and services to meet the needs of all participants. From athlete development, to coaching and judging education, Gymnastics Canada sets the operating standards and practices for the sport in Canada. Our mandate is to promote and provide positive and diverse gymnastics experience through the delivery of quality and safe gymnastics programming. Visit www.gymcan.org for more information, or follow us @CDNgymnastics